The first day of our Ireland trip was one marathon day and really started out the night before when we took off from JFK airport. Our family of four was given the bulkhead row, which was awesome. We had a ton of room. If not for this row, I probably would have left my phone charging at the gate. In the bulkhead row, there’s not seat back pocket or place to store your carry-on. As I was getting anything out we might possibly need during the flight, I realized I was missing my phone. The flight attendants told me to run and get it. I’ve never gotten off a plane after boarding (unless we had reached the destination). I got a lot of weird looks! I also got my phone, so it worked out.

Food on the flight was chicken tikka masala or ravioli. I’ve mentioned in other posts that I get very nervous about being hungry on vacation. As such, I tuck away food at every opportunity. This way, when one of the girls (or me) claims acute hunger, I am prepared. From this meal I was able to take save some crackers and a piece of cake. The breakfast meal was cream cheese and pretzel roll. Two rolls made it to my bag.

We landed in London and had to connect to Dublin. The connecting flight was boarding when we reached the gate, so there was no down time. My husband and parents had bought coffee on the way and had to throw it out. The gate agents were worried about bringing the hot liquids onto a crowded boarding plane. My parents also had to check their carry-on bags due to a full flight.

After reaching Dublin and getting our car, we had an uneventful ride down to Kilkenny. The girls thought the name of the town was very funny. “Why would anyone want to kill Kenny?”

We reached our hotel around 1 in the afternoon and were able to check in a little early. Around 3 we thought we’d try to venture out and do something Irish. We found ourselves at the Smithwick’s Experience. The next tour was starting in 15 minutes, so we bought tickets for it. The family pass was for about 42-ish Euro and my parents were 13 Euro each (yay senior pricing). 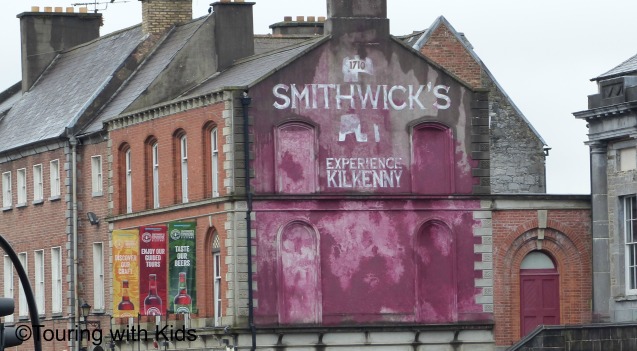 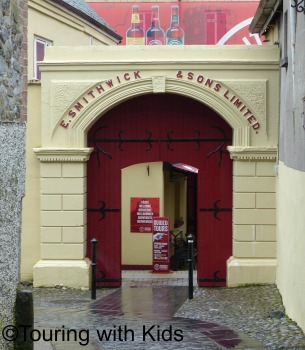 As a rule my daughters don’t like wineries and breweries. For some reason they are bored learning about beverages they cannot drink. But this tour kept their attention. There were holographic monks telling the history of the brewery and some other cook effects. We were also able to interact with the hops and mash and other ingredients I don’t really remember. 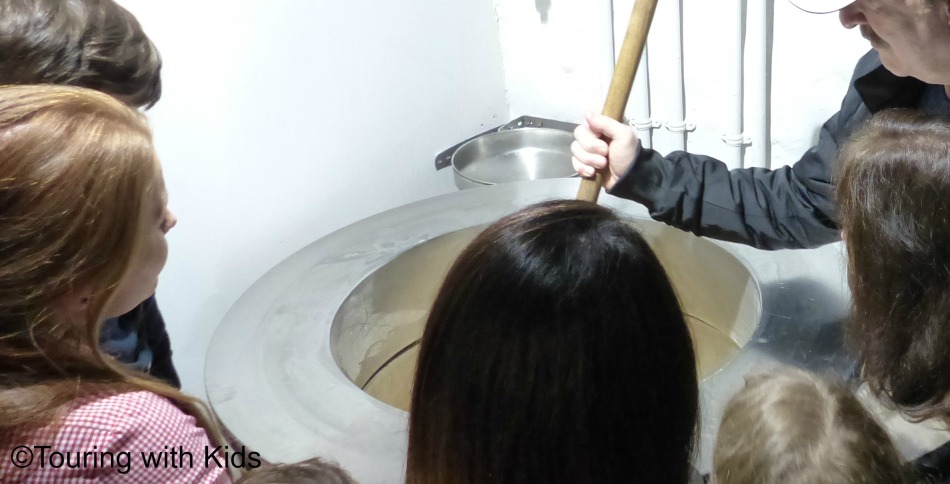 The tour included one pint at the end. Children were able to choose from several sodas. My husband opted for the sample paddle for an extra 3 Euro.  I tried the red ale, which was pretty good. Our tour guide came over with a bunch of coasters and showed the girls a flipping game to play. They had a good time and played with the coasters the rest of the trip.

After the tour we strolled around Kilkenny for a while and stumbled upon Scrumdiddly’s. I think this was Bean’s favorite place in all of Ireland. She regularly talks about it. We enjoyed some decadent ice cream combinations, then made our way back to the hotel via a quick stop at Aldi.

Some hard decisions for this girl!

Lots of toppings and mix-ins. Our favorite was the Cadbury Cream Egg sundae. Perfect for Easter.

My husband and parents went to bed, but the girls were still very awake. I took them to the hotel restaurant and we had a small meal. This tired them out a little and we all got to bed at a decent hour.

Our first day in Ireland went well, but we were all worried about the weather. I know the Ireland can be a damp place, so I was trying to temper my hopes for good weather with reality. My mom was really wanting to see blue skies and bright green fields and I just wanted that to happen for her. The first day was gray and drizzly. Our hopes were that the weather would improve from there.

0 comments on “Trying our luck in Kilkenny (day 1)”