I’m not a runner. While I ran a lot in high school and college, I don’t enjoy it much now. A brisk walk is wonderful, but too much running hurts my knee. I knew about runDisney events and would read race trip reports in various forums and blogs. They seemed like fun. But my general dislike of aching knees quenched any desire I had to participate in a runDisney event.

Until our 2016 trip to Disneyland, which coincided with a runDisney  event weekend.  Seeing all the runners proudly milling around the parks with their Avengers gear, medals and satisfied expressions stirred something in me. Runners I chatted with had positive experiences and recommended runDisney races. I thought, “Well, maybe if we come back this weekend next year…”

We didn’t have that long to decide if we were going to run the race. The registration opened in February. Research showed that the race typically fills up a few months before the race. So by March we had registered and by April had booked the rest of the trip. Even though no one in our family is a Marvel fan, the Marvel race weekend was really the only one around a long weekend to fit our schedule. Fitting best into our schedule was the Spider-man 5k, so that’s the race we signed up for.

Fast forward eight months and our trip had arrived. My husband and I did minimal training for the race, but were at least in the 10-11 minute mile range I had selected when we signed up. We had completed a couple of 5k races and were getting excited for our Disney race.

The day before the race we were able  to pick up our race bags. Signage and cast members helped us find the race expo at the Disneyland Hotel. Lines were minimal and very soon we’d picked up our bags and were exiting the expo. 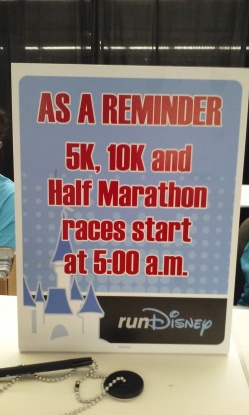 Since we are not serious runners (in fact we are neither serious nor runners) we didn’t hang around and visit the different booths selling various running gear. Instead, we used our small kid-less window to make a quick stop at Trader Sam’s.

Off-topic: Trader Sam’s is a teeny tiny bar/restaurant tucked away in a corner of the Disneyland Hotel. I’d read about it on enough blogs to know that it was easier to visit in a small party and was not necessarily a place the kids would care about. Depending on the drink you order, the volcano on the wall might erupt or the bartenders might spray water and shout. We each ordered a drink. Mine came with a souvenir mug for a large added cost and my husband got a drink with a light-up ice-cube. Super fun and definitely worth a trip if you’re already near the hotel. 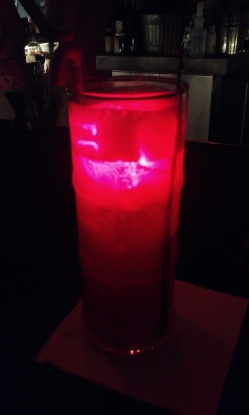 Trader Sam’s was great bonus to signing up for the race. Not great? Waking up at 3 am to start our day. Race transportation started at 3:30 and runners were encouraged to be on site by 4. Not having much to carry we didn’t bring our clear race bags or use the lockers to keep our things. So when we arrived at 4 we kind of milled around, got some water and watched all of the people who put way more effort into getting ready for the race.

There were some hosts who were very energetic for the time of morning. At one point Captain America came out, and Spider-man as well. Had I been into Marvel, I would have been very excited.

It being a Spider-man-themed race, we purchased Spider-man shirts to wear. Other people wore full Marvel costumes, had make-up that must have taken hours and clearly were bigger fans than we were. At this point in the morning I was kind of wishing we could have signed up for a different theme, like the Princess Weekend. But, it was fun people-watching and the enthusiasm of the runners was catching. 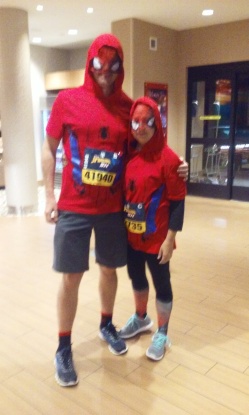 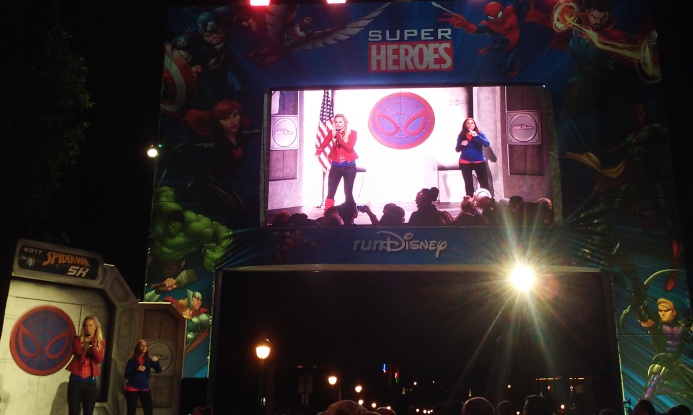 Around 4:30 we started to head towards our corrals. Again, there wasn’t much to do at this point besides admire how much effort runners put into their costumes. There were hosts at this point, too, to help pass the time.

At 5, they started staggering the runners. First were wheelchairs with a 2 minute head start. Then runners from corrals A and B went off at 5 minute intervals. My husband was originally put in corral B. Since I was in C, he was allowed to drop down to my group. I was not allowed to move up. We were fine with C and had no problems finishing the race ahead of any sweeps (we never saw them).

My husband’s pictures and video are even blurrier from this point on as we were only using phones and GoPro and it was still dark. Add in the movement and they are hard to make out.

It was our turn to go and the start was pretty orderly. There was really a sense of people trying to enjoy the race rather than win. We ran along for a little and then entered California Adventure through the back of Cars Land. This is where the magic in the race began.

Both parks were completely lit up and rides were running. Cars Land is beautiful on a normal night, but on a chilly morning, it was a welcome sight. Running past an operating and empty Luigi’s Rollickin’ Roadsters, it really felt as if the ride was cheering us on. (Before running this, I would absolutely have rolled my eyes at a statement like this. I get it. Roll away.) For me, this was better than the characters along the race or any other part. I felt like I was experiencing something entirely new in Disney and it will stick with me.

Sometimes Spider-man would pop up on top of a building or on a balcony and cheer us on. This was a nice touch. We ended up bypassing all of the character pictures due to very long lines. Truth be told, I didn’t even know who many of them were. I think there were about 5-6 characters. By this point, my focus was staying in the moment and enjoying the feeling of running through the park.

After Cars Land, we passed through Bug’s Land and then skirted around Paradise Pier. We made our way past Grizzly River Run and Soarin’ before running through Hollywood Land and looping past the Guardians of the Galaxy ride. We then ran in a tunnel connecting the two parks and came out in Tomorrowland. This was another thrill as we experienced the lights and sounds of Tomorrowland. We passed the Matterhorn and came into Fantasyland. The Mad Tea Cups were also up and cheering us on.

Around Fantasyland, and then we got to pass through the castle! It was by no means empty, but it was beautiful and novel to be there so early in the morning. We ran through a gleaming Main Street before heading out of the park and running through Downtown Disney. After this, I just wanted to be done. The park part was over and I felt I accomplished my magic.

At the finish line the hosts were calling the names of runners (they were pulled up by the bibs) and congratulating them. We crossed the line and picked up our medals and our snack boxes.  The picture lines were were reasonable, but after a few pictures were were done. It turned out that the parking lot where the race ended was very near our hotel. We decided to walk instead of waiting for a bus.

We were back at the hotel before anyone else was even up! We wore our race shirts that day, but only wore the medals for a short time. A Photopass photographer did take some pictures of us with our medals.

Overall, the race was very early and fairly expensive (but no overly so). I’m not into Marvel and would have preferred a more Disney-themed race. But, the energy of the runners and their enthusiasm made the race a lot of fun. I loved running through the parks and experiencing them in a new way. The music, sounds and sights made this entirely unique and completely Disney.

I would love to run another runDisney, but am running into difficulties. Races in Anaheim have been suspended for a few years. The races in Orlando seem mainly to run through Epcot, with only the longer races making it through the Magic Kingdom. I’m not sure if I’d enjoy this as much. My favorite part of the race was the empty rides cheering me on (because clearly that’s what they were doing). There’s no opportunity for this in Epcot.

So we’ll see. I didn’t think I would ever do a runDisney race, so I’m trying to keep an open mind. I’m grateful we ran one in Anaheim before they went on a break. Maybe I’d find a different kind of magic in a Disney World race. Maybe something else will cheer me on.

0 comments on “I Never Thought I’d Do runDisney, but I’m So Glad I Did”